Musselburgh Broke is inspired by a story from an 1847 brewing book about a beer that is "clear and very brisk, and, consequently, very agreeable to the palate."

This modern interpretation of this particular Scotch Ale style displays the characteristic malt sweetness perfectly balanced by some delicate hops added throughout the brew. 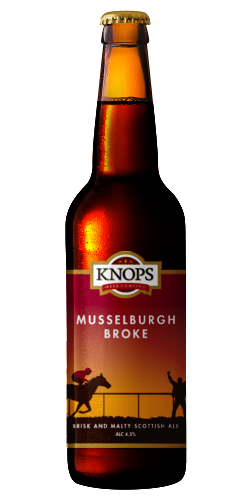 Taste: Caramel, toffee and cocoa from the malts. A smooth, dry finish with dark malt astringency

Our modern interpretation of this Scottish beer uses four different malts; Pale Ale, Crystal, Chocolate and Roast Barley. These combine to give the beautiful chestnut colour and the delicious malty sweetness.

During the brew, hops are added in small quantities in two stages to ensure that the lovely malty character typical of this style of Scottish ales is not overwhelmed. The hops are there for balance. The malt is the true star of this show!

If we may believe a tradition current in Scotland, this method of rendering table-beer brisk by the addition of cold water arose from accident. A brewer's drayman going his usual round one day, accidentally spilt a considerable quantity of beer contained in one of the casks. To prevent his master becoming acquainted with his carelessness, he filled up the cask with water, at the first stream he passed, on the road to Musselburgh, and left it at the nearest public-house, which was kept by an old woman, a regular customer, and a person whom he thought was less likely than others to discover the inferiority of the beer. Going some time afterwards to Musselburgh, he called for the old woman, expecting a severe rebuke for leaving her such sour, weak trash, and dreading it being returned. He was as much pleased as astonished to be informed, that it was the best beer she ever had, and that she hoped his master would always brew such, as her customers were much pleased with it - in fact, she never had had beer that took the bottle so soon, and was so fine, sharp, and brisk.

On his return home, the drayman told his master all the particulars of the accident and its consequences, who improved upon the hint for his future advantage. From this story, small beer, when it is very brisk, is often designated by the vulgar 'Musselburgh Broke'.
View our other beers