Originally known as steam beer, it was first brewed in the Californian gold rush days to slake the thirst of miners. Originating in the mid to late 1800's, a lack of refrigeration meant that lager beer was fermented at higher temperatures giving the beer its distinct malty flavour and light colour.

It is one of the few styles truly native to North America and pays testiment to the ingenuity of brewers. The term 'steam beer' has since been trademarked so the style is now known as California Common. 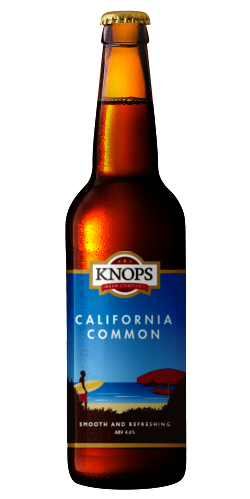 Taste: Initial malt sweetness balanced by bitterness, light toffee notes followed by a lingering secondary bitterness hit that is refreshing rather than overwhelming

This is an all malt brew using 2-row pale ale malt. A small amount of crystal malt is used to give the beer it's deep golden colour and also contributes some light toffee notes to the flavour.

California ale yeast (known for its clean flavours and balance) is used and fermentation is carried out at lower than usual temperatures resulting in a clean crisp finish. The beer is conditioned at low temperature for a minimum of 21 days allowing the yeast to slowly continue its work.