The Knops brewery is located on the Archerfield Estate as part of their Walled Garden visitor complex. Situated in stunning East Lothian the brewery is very accesible making it great for visits.

In Spring 2013, we comissioned a brand new brewery set on the beautiful East Lothian coastline. 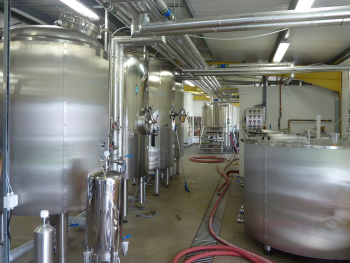 Archerfield Estates, situated between the picturesque towns of Gullane and Dirleton, and the striking Firth of Forth, have restored an historic walled garden. As well as bringing the walled garden back to its former glory, a new building comprised of a bar/restaurant, farmshop has been built. The Knops Brewery has its home as part of the walled garden complex.

The brewery equipment is brand new and state of the art which gives us great control and flexibility over the beers that we produce. We also have our own bottling line giving is end-to-end control over the brewing process. We currently produce our core range for bottle and draught (cask and keg), and we also release of new, seasonal and one-off beers.