Black Cork was a beer brewed in Edinburgh in the 18th and 19th centuries. It was brewed by Bell's brewery which used to be located where the Pleasance Theatre now stands. The recipe and secret of brewing Black Cork seems to have died with it's last brewer Robert Keir in 1837. 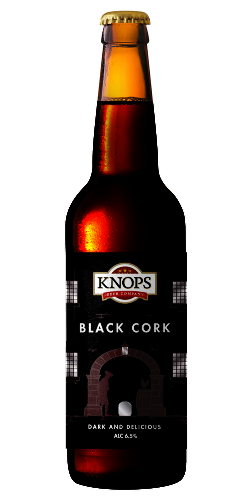 Black Cork is a dark beer - some might say a porter - that has been created based on the historical accounts of a legendary Edinburgh style.

At one time Edinburgh had one of the UK's largest concentrations of breweries - there was an abundance of natural ingredients and the availabilty of soft water from numerous springs produced ales of high quality. Bell's brewery, the original brewer of Black Cork, was well regarded:

"The Pleasance consists of one mean street; through it lies the principal road to London. There is nothing remarkable in this suburb except a large brewery, with spacious vaults, belonging to Mr Bell, where the best strong beer is made of any brewed for sale in Scotland. The quality of it is, indeed, so good, as to recommend itself to be purchased not only for home consumpt, but also for exportation."

At this stage I should mention Robbie Pickering who did some excellent research on the history of Black Cork and who challenged exactly what style of beer Black Cork was. Robbie also uncovered a link to to another of Edinburgh's more infamous characters - Deacon Brodie.

A greatly respected member of Edinburgh's society, Brodie (1741-88) was a skilful cabinet-maker and a member of the Town Council as well as deacon (head) of the Incorporation of Wrights and Masons.

However, Brodie led a double life. He was a heavy gambler, had a number of mistresses and illegitimate children and at night would lead a gang of burglars using his privileged position to make wax imprints of keys to the buildings in which he was working.

Brodies last crime was a bungled raid on His Majesty's Excise Office in the Canongate. The night of the raid Brodie and his accomplices Smith, Ainslie and Brown

"met in an upper room in Smith's house, and had some herrings, chickens, gin, and black cork, which last he explained to be Bell's beer..."

Ainslie was caught and turned Kings evidence on the rest of the gang. Brodie fled to Amsterdam where he was eventually hunted down and extradited to stand trial in Edinburgh. Found guilty, he was sentenced to hang along with Smith. Ironically it is likely that he had a hand in the design and construction of the very gibbet on which he was hanged.

So, perhaps Black Cork had a part to play in the downfall of Deacon Brodie on that fateful night.

I guess we will never know the true taste of Black Cork but we have produced a beer which is inspired by the mystery surrounding this legendary beer.

Additional thanks also goes to Archie "more hops" Carmichael - formerly manager of the Stockbridge Tap - who helped develop the recipe and encouraged (forced) me to add more hops.